Help curb the spread of COVID-19. Remember to wear a mask in public, and always social distance

Help curb the spread of COVID-19. Remember to wear a mask in public, and always social distance here.

Motherhood is one curveball after another. The reason behind this is. You feel confident and  think that you have it all together while arrogantly believing  that you understand your child’s stage in life. Of course not! There’s always a new milestone or skill to be taught. Potty training toddlers has always frightened me. I heard stories about cleaning up lots of number 1 and 2s. I was ready to bring out the poop-scoop.

I was dreading  potty training Adriana. It was stressing me out. She didn’t seem too interested about the toilet. I’d often put her on the toilet before having her bath. I’d imitate “weeing” noises to encourage her to wee but Adriana would just imitate my sound effects and proceed to urinate in the bath.  I gave up on this exercise after no luck.

I thought leave the idea until the August school holidays. The end of August when Adriana is 2 years  old (remember she’s a June baby) and the weather starts warming up.

Time for the potty

I asked my mom how she started the process of potty training years ago with my sister and I. She explained how she got me excited about being “a big girl” and about wearing panties.  She did warn me to be patient about it and that it takes quite some time to get it right.

So I set off to the shops with Adriana in tow to select her panties. We left with Disney’s Frozen, Sofia The First and Paw Patrol panties. She was giddy about her new panties that she had to hold them  and even napped with her new underwear in hand.

Next stop, choosing  a potty. I figured I’d go for the old-school little potty. I showed her and Adriana seemed impressed. While I browsed the aisles in WestPack, I heard a familiar sound of velcro opening. Adriana had proceeded to pull down her pants and remove her nappy like a ninja! She wanted to test out. I thought maybe she’s ready for potty training.

We arrived home after operation potty shopping and I decided it was time for the panties. She wanted to Elsa panties sans her pants because she wanted to show us her panties. Then the yellow river came and she just looked confused at the situation.

The potty I bought wasn’t as appealing at home. It was terribly low and she wasn’t a fan of the small potty.

Back to the drawing board

I decided that I’d have her choose her potty the next day.  A different potty. Something that I approve of.  We headed to Baby City and saw this potty. Adriana was already familiar with this one as she’d press the music button all the time at her cousin’s house. 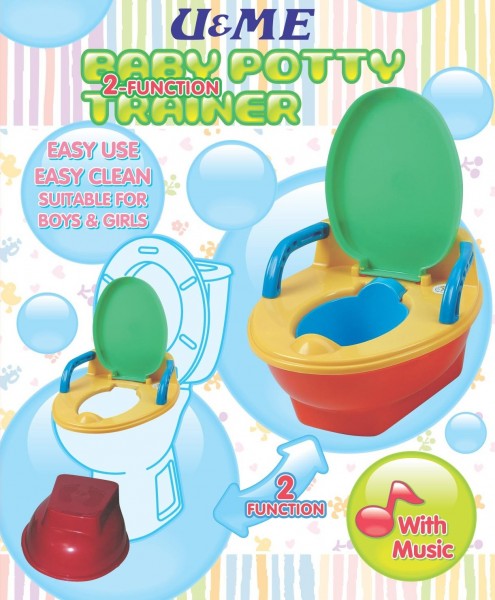 I was happy with her choice as it’s a 2-in-1 potty. She should be able to use it for a while. Fingers crossed!

The Saturday, we had a bridal to attend so I just figured I’d put the nappy back on. I’d try again whenever. That evening I realised I should do a bit of research on the matter.

I came across a article on Pinterest that claimed that potty training could be done in three days!

Three days! I thought that this was complete BS! No ways I could do that with Adriana.

On the Sunday, I had no plans and decided to try show Adriana her potty. It was a warm day so I dressed her in the panties of her choice with a t-shirt. I figured it would be easier for her.

I left the potty in the lounge as this is where we spend most Sundays. Playing on the carpet or watching tv. I asked her if she needed to wee every so often. I had to clean up one accident in the morning. She grasped, “Oh no!” when she made a mess. I never once shouted at her. I told it’s fine and that the next time it happens, she’ll use her potty.

Luckily, she caught on really quickly. I found that praise along with a potty dance made Adriana excited to potty. For addition positive reinforcement, I gave her one coin every time she used the potty. Adriana has a piggy bank in her room that she loves to put coins in. If I ever found loose change, I’d give it to her. So I found something that she likes in order to create excitement.

By lunch time, I noticed she was hiding away from me. (Read: Hiding to poop)! I quickly told to come to the potty and I’d give her two coins and a Peppa Pig Pez! Sounds ridiculous, I know…

I kid you not, it actually worked.

Day one went off better than expected.

In the next five days, (Monday to Friday) Adriana had two accidents. Both on the same day. The first one at home at home because she didn’t make the potty. The second was at the gym in the children’s care centre. Luckily the child minders at my gym are lovely ladies. I explained to them that I was potty training Adriana and I’d gladly put a nappy on her. They were supportive and insisted that I don’t confuse Adriana by swapping during the day between panties and nappies. They advised that I stick to the panties. Also that Mommy’s attitude affects the toddler.

So I followed their advice. Thinking that it can’t be that easy but it was worth a try. It quickly got to the point the very next day that Adriana would go to the potty  by herself. I continued the potty dance with her every time and the coin reward system.

The next hurdle was public toilets but little madam easily took it in her stride. I was worried that she wouldn’t like to use the “big toilet” and demand the potty. She’s not fussy at all.

I have to give Adriana credit! She’s been a real trooper. She’s definitely thrown me a curveball that I wasn’t expecting.

I don’t think potty training is cut and dry. Every child reaches their readiness at different ages. This is just my personal experience with Adriana. I think I was lucky with her.

The best tips I can advise is don’t fret about it. I think your child feeds off your energy.

Don’t force the issue too early. If it doesn’t work this weekend, try again another day.

Accidents do happens, pack two to three pairs of pants along with spare shoes when you’re out. Along with plastic bags.

Try the pantless route while you are home on the weekend.

Let me know if you are busy with potty training your toddler and your experience so far.

To my darling: Month 1

For the love of a dog…

To My Darling: Month 9

Nikita Camacho, a freelance writer navigating life as a working mom. Take a seat to enjoy authentic, amusing, mothering with this mommy and lifestyle blogger View all posts by Nikita Camacho

Welcome to my corner of the online sphere. A place where we can be honest about mothering while trying to juggle life as working moms. As mothers, we worry about losing our identity, so let's find out together. With eight years of experience as a wordsmith, I'm never at a loss of words but maybe that's my Portuguese heritage coming through.